Oxford airport has presented its redesigned airspace change that is now an area almost the same as presented in the consultation document but instead of class D, the airspace is a TMZ and RMZ. This means that aircraft using a designated transponder code can enter, and aircraft which are non-transponder may be given access to the TMZ by a controller under RMZ rules.

RAF Brize Norton has presented its redesigned CTR/CTA design that includes Class E plus TMZ/RMZ within some of the CTAs. The GA Alliance is challenging the design based on a number of fundamental points including justification, complexity and impact on users operating outside the controlled airspace.

RAF Brize Norton is approaching stakeholders seeking to agree Letters of Agreement regarding access to their proposed controlled airspace.

The BGA responses to both consultations are available here.

All pilots are encouraged to respond to both consultations before 5th April 2018. 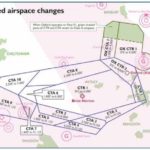 A consultation response team has been formed respresenting the GA Alliance under the leadership of Steve Noujaim (BGGC).

Steve Slater (LAA CEO) has published an informative article describing the proposed changes and associated issues. You can view the article here.

As anticipated, Oxford and Brize Norton have published their airspace change proposals. There is little doubt that these two disproportionate airspace change proposals pose a very significant threat to the viability of gliding and other recreational aviation in and through the area, and will significantly increase risk for the majority of airspace users operating outside of the proposed airspace.

The Brize Norton proposal can be viewed here.

The Oxford airport proposal can be viewed here.

In discussion during 2017 with Oxford, Brize Norton and their consultants, Osprey, it became clear that as the current CAA process does not require it, minimal effort has been made to understand or address the needs of other stakeholders.

The core justification for Oxfords change proposal is a historic airprox close to the Oxford airport circuit between two GA aeroplanes, one of which failed to take avoiding action despite awareness of the threat. Oxford believe their operation is safe. The real issue is Oxfords desire to control the local airspace. Additionally, Brize Norton, who carry out circuit and other procedural training in real airliners unlike airlines that use far more economical and environmentally beneficial simulators, have decided that their Airbus aircraft movements may occasionally need to fly longer approaches.

The BGA will continue to work with BGA clubs and other GA organisations on this important issue.

Meanwhile, we would urge all pilots to be prepared to respond to the consultation in due course having considered the available detail. More detail will be published on this webpage in due course.

The (amended) closing date of both consultations is now Thursday 5th April 2018.
.