The CAA’s Class G for the 21st Century Airspace study recognises that the level of risk in UK airspace is acceptable. Mid air collisions account for around 5% of the fatal accidents in general aviation. Statistics demonstrate that collisions with gliders occur in thermals or close to their airfields.

Lookout is the primary method of collision avoidance in class G airspace. It’s important to recognise that effective lookout requires technique supported by other attributes available to pilots.

For guidance on the limitations of the human eye and why a lookout scan is vitally important, take a look at this BGA publication.

You can help to keep yourself and others safe by making the most of the following six attributes that are available to pilots;

This video by Mike Fox demonstrates important points about sharing a thermal with other gliders.

Most glider pilots choose to use technology to enhance their awareness and to help to direct their lookout more effectively. Some of that technology is described below.

Please note that it is necessary to avoid any in-cockpit equipment from distracting from the visual lookout scan.

Most glider pilots fly in radio equipped gliders. Correctly used, radio is helpful in building and maintaining situational awareness, including with air traffic controllers. Pre-programming frequencies before flight can prevent head down time and other in-flight hazards caused by distraction. Information about pilot radio licences can be found here.

The BGA encourages the widespread use of traffic and collision warning systems in gliders, motor gliders and tugs.

Pilots should make their own decision on equipage based on compatibility with other systems and as to whether such a system is appropriate for their particular operation. Pilots are reminded that whilst electronic collision warning equipment can enhance pilots’ awareness by providing most useful warnings, such equipment cannot and must not replace a good systematic visual lookout scan. Here are the current technologies in use:

FLARM is an increasingly popular traffic and collision warning system and particularly so within gliding where there is widespread adoption.

Each FLARM device determines its position and altitude with a highly sensitive state of the art GPS receiver. Based on speed, acceleration, heading, track, turn radius, wind, altitude, vertical speed, configured aircraft type, and other parameters, a very precise projected flight path can be calculated. The flight path is encoded and sent over an encrypted radio channel to all nearby aircraft at least once per second.

At the same time, the FLARM device receives the same encoded flight path from all surrounding aircraft. Using a combination of own and received flight paths, an intelligent motion prediction algorithm calculates a collision risk for each received aircraft based on an integrated risk model. The FLARM device communicates this, together with the direction and altitude difference to the intruding aircraft, to the connected FLARM display. The pilots are then given visual and aural warnings and can take resolutive action.

There is some evidence that some FLARM aerial installations are not as effective as they could be.

Automatic dependent surveillance – broadcast (ADS–B) is a cooperative surveillance technology in which an aircraft determines its position via satellite navigation and periodically broadcasts it, enabling it to be tracked. The information can be received by ATC ground stations as a replacement for secondary radar. It can also be received by other aircraft to provide situational awareness and allow self separation.

ADS–B is “automatic” in that it requires no pilot or external input. It is “dependent” in that it depends on data from the aircraft’s navigation system. ADS-B data can be recorded and downloaded for post-flight analysis. ADS-B also provides the data infrastructure for inexpensive flight tracking.

The system relies on two components—a high-integrity GPS navigation source and a datalink (ADS-B unit). There are several types of certified ADS-B data links, but the most common ones operate at 1090 MHz. To obtain ADS-B Out capability at 1090 MHz, one can install a new transponder or modify an existing transponder plus install a certified GPS position source if one is not already present.

The BGA recognises that ADS-B, if correctly developed and deployed with changes to airspace rules, can provide benefits to all users. It is possible, for example, that ADS-B, if correctly deployed, could make integrated (rather than segregated, as it is now) UK airspace a reality  and thereby reduce restrictions. However, there are many hurdles to overcome to get there!

The CAA’s (manned aircraft) Electronic Conspicuity Working Group, which is supported by the BGA, is working on a variety of future airspace EC issues primarily relating to ADS-B, which is the CAA’s preferred EC technology.

PilotAware is a low cost avionics unit that will detect transmissions from other aircraft which are then used to give increased positional awareness. Local aircraft will be detected so long as they are transmitting their position using one of many transmission frequencies used in Europe. These signals will be from PilotAware on 869.5MHz, Mode C/S transponders and ADSB on 1090MHz, and FLARM transmissions.

PilotAware uses an on-board computer and GPS to determine its position. This data is then transmitted over a transmit and receive antenna to other PilotAware users to show its and their position relative to each other. This information is then used to provide a visual alert on your electronic tablet via WiFi, either using PilotAware RADAR or interfacing with the navigational package of choice. An audio alert of bearing, height and distance is also available from PilotAware via a cable.

Additionally, a second receive only antenna detects transmissions on the standard aviation frequency of 1090MHz. These will be signals from aircraft transponders either Mode C, Mode S or ADSB. Like PilotAware, ADSB transmissions contain GPS data so they will be treated exactly the same as PilotAware signals. Mode C and Mode S transponder signals contain no GPS co-ordinates and hence give no information on bearing. PilotAware will still report on these aircraft but using a different visual and audio alert. PilotAware does not transmit out on 1090MHz.

Gliders using FLARM or OGN tracker devices will be detected from signals transmitted from OGN-R ground stations. These signals contain GPS co -ordinates and so like PilotAware and ADSB, accurate positioning is available.

A transponder provides a signal that is externally interrogated. Depending on the type of interrogation, a transponder sends back a ‘squawk code (Mode A) and/or altitude information (Mode C) to help air traffic controllers to identify the aircraft and to maintain separation. Another mode called Mode S (Mode Select) is designed to help avoiding over-interrogation of the transponder (eg many radars in busy areas) and to allow collision avoidance with similarly equipped aircraft. Mode S transponders are ‘backwards compatible’ with Modes A & C. Transponders represent very limited benefit to the users in uncontrolled airspace. Mode C and Mode S transponder signals contain no GPS co-ordinates and hence give no information on bearing. Power use is an issue for any aircraft reliant on battery power.

So – what EC should a glider owner equip with?

Of course budget can be a significant issue. But if you want to mitigate your and other glider pilots greatest mid air collision risk, at least equip with FLARM.

If you want to be visible to ATC, you additionally need a transponder.

Adding transponder ADS-B out capability makes sense. In the absence of a transponder, a SkyEcho ADS-B device can provide useful ADS-B out, although it is not compatible with TCAS.

If you want to detect ADS-B, PowerFlarm with ADS-B is an option. So is PilotAware. And so is SkyEcho (but it does need an add-on display, eg Skydemon). 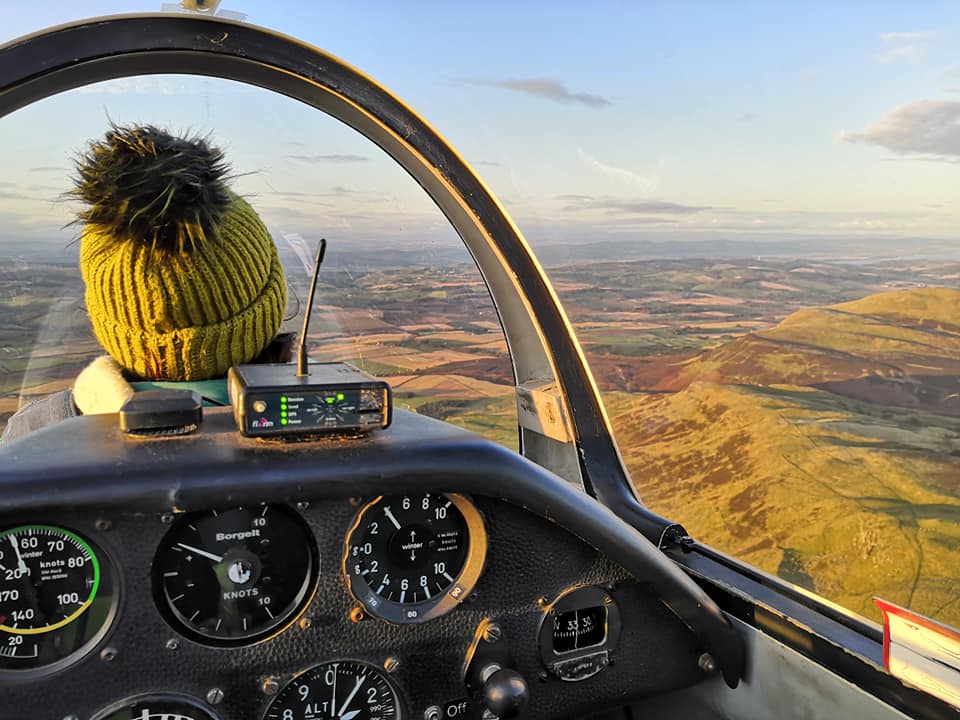