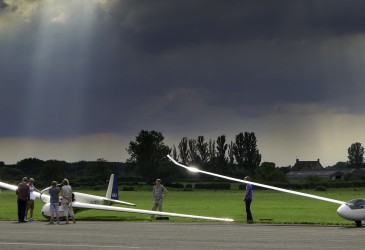 Its been a busy summer with several members having badge successes. Dave Bradbrook and Tom Pavis acheived Silver whilst John Felkowski did his Silver C distance. Mark Wem did the five hour duration leg on the 8th of August followed by Matt Oakey, who did distance and height on August 12th.

Our courses have proved popular and helped a number of pilots progress. Andy Carden went solo in May and we had a notable success in the last week in August when 14 year old Lewis Bond flew solo on the last day of the course. Our established pilots have made good progress also with Owen Glew, John Masheder and Enrico Pagliuca succesfully converting to the Junior, and all three flying Bronze legs thereafter.